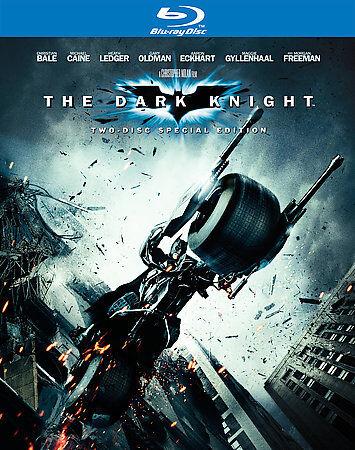 Why are you reading this and not watching the movie?!

Heads up: a thunderbolt is about to rip into the blanket of bland we call summer movies. The Dark Knight, director Christopher Nolan's absolute stunner of a follow-up to 2005's Batman Begins, is a potent provocation decked out as a comic-book movie. Feverish action? Check. D...Lire toute la critique

Why are you reading this and not watching the movie?!

Heads up: a thunderbolt is about to rip into the blanket of bland we call summer movies. The Dark Knight, director Christopher Nolan's absolute stunner of a follow-up to 2005's Batman Begins, is a potent provocation decked out as a comic-book movie. Feverish action? Check. Dazzling spectacle? Check. Devilish fun? Check. But Nolan is just warming up. There's something raw and elemental at work in this artfully imagined universe. Striking out from his Batman origin story, Nolan cuts through to a deeper dimension. Huh? Wha? How can a conflicted guy in a bat suit and a villain with a cracked, painted-on clown smile speak to the essentials of the human condition? Just hang on for a shock to the system. The Dark Knight creates a place where good and evil — expected to do battle — decide instead to get it on and dance. "I don't want to kill you," Heath Ledger's psycho Joker tells Christian Bale's stalwart Batman. "You complete me." Don't buy the tease. He means it. The trouble is that Batman, a.k.a. playboy Bruce Wayne, has had it up to here with being the white knight. He's pissed that the public sees him as a vigilante. He'll leave the hero stuff to district attorney Harvey Dent (Aaron Eckhart) and stop the DA from moving in on Rachel Dawes (feisty Maggie Gyllenhaal, in for sweetie Katie Holmes), the lady love who is Batman's only hope for a normal life. Everything gleams like sin in Gotham City (cinematographer Wally Pfister shot on location in Chicago, bringing a gritty reality to a cartoon fantasy). And the bad guys seem jazzed by their evildoing. Take the Joker, who treats a stunningly staged bank robbery like his private video game with accomplices in Joker masks, blood spurting and only one winner. Nolan shot this sequence, and three others, for the IMAX screen and with a finesse for choreographing action that rivals Michael Mann's Heat. But it's what's going on inside the Bathead that pulls us in. Bale is electrifying as a fallibly human crusader at war with his own conscience. I can only speak superlatives of Ledger, who is mad-crazy-blazing brilliant as the Joker. Miles from Jack Nicholson's broadly funny take on the role in Tim Burton's 1989 Batman, Ledger takes the role to the shadows, where even what's comic is hardly a relief. No plastic mask for Ledger; his face is caked with moldy makeup that highlights the red scar of a grin, the grungy hair and the yellowing teeth of a hound fresh out of hell. To the clown prince of crime, a knife is preferable to a gun, the better to "savor the moment." The deft script, by Nolan and his brother Jonathan, taking note of Bob Kane's original Batman and Frank Miller's bleak rethink, refuses to explain the Joker with pop psychology. Forget Freudian hints about a dad who carved a smile into his son's face with a razor. As the Joker says, "What doesn't kill you makes you stranger." The Joker represents the last completed role for Ledger, who died in January at 28 before finishing work on Terry Gilliam's The Imaginarium of Doctor Parnassus. It's typical of Ledger's total commitment to films as diverse as Brokeback Mountain and I'm Not There that he does nothing out of vanity or the need to be liked. If there's a movement to get him the first posthumous Oscar since Peter Finch won for 1976's Network, sign me up. Ledger's Joker has no gray areas — he's all rampaging id. Watch him crash a party and circle Rachel, a woman torn between Bale's Bruce (she knows he's Batman) and Eckhart's DA, another 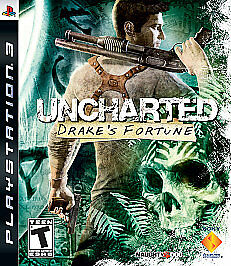 It's been a rough year for PlayStation 3 owners. Exclusives have been lost, a handful of titles have been bumped from the bottom line-bolstering holiday season, and Lair was Lair. With each disappointment, more and more fans have looked to Uncharted: Drake's Fortune -- a tit...Lire toute la critique

It's been a rough year for PlayStation 3 owners. Exclusives have been lost, a handful of titles have been bumped from the bottom line-bolstering holiday season, and Lair was Lair. With each disappointment, more and more fans have looked to Uncharted: Drake's Fortune -- a title whose screenshots have been lauded for months -- to be the saving grace of Sony's 2007. But pinning so much on one title pretty much guarantees a letdown, doesn't it? Can Naughty Dog live up to more than a year of mouthwatering coverage and placate fans who forked over $600 to see stellar title after stellar title come out on non-PS3 platforms? Yes. Yes, it can. Uncharted: Drake's Fortune is the most fun I've had in a videogame this year. Putting you in the shoes of Nathan Drake -- a worldly treasure hunter on the trail of something big -- Uncharted tosses players into a third-person action/adventure/platforming/shooting homage to the pulp-action movies of yesteryear. Nate takes on pirates, scales ancient walls, swings from jungle vines and solves puzzles using the most basic of clues on his path to unearthing the secrets of his ancestor Sir Francis Drake alongside his cigar-chomping buddy Sullie and newswoman Elena. Uncharted does what few titles manage -- it completely immerses you in its experience. From the moment the game begins with a sweeping camera move through the waters off Panama, a rich score and the words of Sir Francis Drake etched on screen, Uncharted will have you hooked. It'll maintain that hold with its story, style and gameplay. If the broad strokes of Drake's treasure hunting story sound hackneyed -- a tough female reporter who hates the hero at first slowly starts to dig him, the older partner's past catches up with him on the hunt of the century, etc. -- rest assured that the possible setback is blown out of the water by the superb dialogue and motion capture from the cast. I don't like your haircut. A lot of times we as an industry like to wax on and on about how videogames rival movies, but rarely do we have an example as well done as Uncharted. Nate is funny as he laments over yet another wall he needs to scale, Sullie is loveable as he tells the same traveler's tales over and over, and Elena's fire for her story and give-and-take with Nate is endearing. When these characters interact and you watch their relationships grow, you feel like you're part of their circle. You feel like they're your friends. Hell, Naughty Dog even went the extra step and made Elena and Sullie non-playable characters that actually help you out. From the first time Elena and I got into it with a set of pirates, she was alongside our hero shooting the bad guys. Mind you, she wasn't softening them up for Drake and she wasn't hiding, she was shooting to death the guys I missed. When Sullie and I were investigating ancient ruins in the heart of the jungle, my former mentor was quick to pull chain levers to open doors for me as well as provide his lighter to enact certain puzzle pieces on our journey. Non-playable characters with spot-on AI is something we don't see enough of in games. 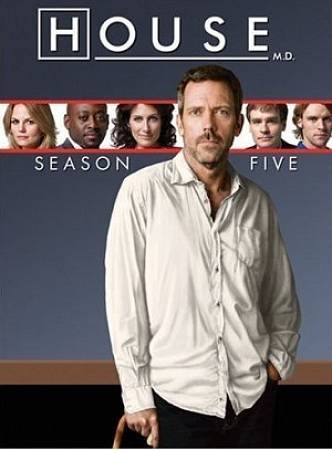 House's fifth season took somewhat of a dark turn when compared to the previous seasons. Two cast members died, though I suppose you could say that Amber (Anne Dudek) really died in the fourth season finale, but it really only hit home in the fifth season opener, "Dying Chan...Lire toute la critique

House's fifth season took somewhat of a dark turn when compared to the previous seasons. Two cast members died, though I suppose you could say that Amber (Anne Dudek) really died in the fourth season finale, but it really only hit home in the fifth season opener, "Dying Changes Everything". The loss of Amber really hit Wilson (Robert Sean Leonard) hard, so much so, that he resigned from Princeton-Plainsboro. Coming into this season, one of the things that seemed to be missing was Dr. House's investigations into his employees. We've come to know quite a bit about the doctors over these years, but there were still some lingering secrets that hadn't been uncovered. This gave House the excuse to hire a private investigator (Michael Weston). Not only did Weston's character look into the lives of House's employees, but he followed Wilson around. House was not only concerned for his (former) best friend, but he was also just a little nosy. Some things never change -- right? It didn't take long for Wilson and House to talk about Amber's death. Before long, they were friends again and were on their way to pay their respects to House's recently deceased father. We only saw his father, John (R. Lee Ermey) once on the series. I can't help but feel disappointed by this fact. R. Lee Ermey is one hell of an actor. House may not have liked his father, but surely something could have been written for the character. House and his father may not have had the best relationship, but there were a few who did have a good relationship. Foreman (Omar Epps) and Thirteen (Olivia Wilde) got together while Chase (Jesse Spencer) and Cameron (Jennifer Morrison) continued with their relationship. Neither of these relationships really moved me. In fact, both of them were more frustrating than anything positive. Take the Foreman/Thirteen relationship for example. Diagnosed with Huntington's disease in the fourth season finale, Thirteen was reluctant to get into a relationship with anyone. Foreman was completely the opposite. This reminded me of the relationship Cameron must have had with her husband before he died. After a matter of weeks, Foreman lost his damn mind and decided to risk his career by not only getting involved in the drug trials that Thirteen was involved with, but he even switched her medication when he learned that she was on the placebo.