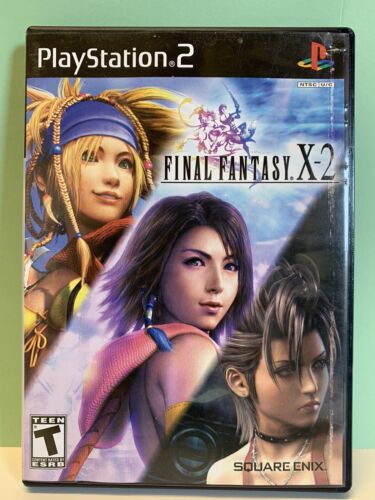 Decent sequel, but not the one we wanted

Final Fantasy X-2 is the sequel to the magnificent Final Fantasy X, which was weighty and emotional and loaded with pathos. So to see this game open with a rock concert animation ending in a "girl power" battle is jarring to say the least. Even more off-putting is the inclus...Lire toute la critique

Decent sequel, but not the one we wanted

Final Fantasy X-2 is the sequel to the magnificent Final Fantasy X, which was weighty and emotional and loaded with pathos. So to see this game open with a rock concert animation ending in a "girl power" battle is jarring to say the least. Even more off-putting is the inclusion of peppy pop music that makes battles too annoying to fight with the sound on. Aggravating even beyond that is the stinging sensation that this was a game made for girls -- but a game made for girls by boys who had stereotypical ideas of what girls would like and what boys would lust for: cutscenes of bikini-clad main characters relaxing in a hot spring, sexy poses during a battle that make no sense for fighting -- one character's signature stance actually has her back turned to the enemy -- and literally CHANGING CLOTHES for new powersets and status boots. The main game has five episodes centering around a quest for a missing team member from Final Fantasy X, which is what will draw in most players. However, there are a metric ton of side quests to keep one distracted, and one actually misses out on quite a bit of story if one doesn't take every side quest possible. I had to go back and watch some side quests on YouTube to get the full gist of the story. So even though only a few towns available might light up as "hotspots", you really need to hit every town possible to get the full game experience (as well as access to all the characters' powersets). Gameplay is pretty standard and the "dressphere" system is fairly easy to grasp, though there are several powerset-granting costumes you'll likely never use. The game also includes status-boosting "garment grids" in which to place the dresspheres that determine your characters' costume changes and which grant powerset and/or status boosts upon changing clothes mid-battle (as well as some static grants in battle). I only made use of perhaps four of these total, though the game provides a couple dozen -- it's just too time-consuming to change clothes mid-battle, even if you have the configuration option to turn off the wardrobe-altering cutscenes (which, in a few cases, are almost NSFW). The worst thing about Final Fantasy X-2 is getting halfway through the game and realizing that you're not going to get the payoff you were looking for going into the game. One of the game's more challenging themes is how much people change, and that includes the game's characters. You realize early on regarding the main character Yunie that she's not the same person as she was in Final Fantasy X, which can only be expected since she's no longer a summoner and no longer under the crushing weight of duty she endured in Final Fantasy X. You go into the game wanting to pick up where you left off in Final Fantasy X, but time and the characters have moved on, and there's no going back. Ironically, a later sequel called Final Fantasy X-2: Last Mission would be released that hammers heavily on this theme, as it finds that the characters in X-2 have moved on even from one another, each chasing different goals and finding that they've consequently grown apart. (Last Mission is not included in this version of the game -- I watched a YouTube video of the gameplay and wasn't impressed by it.) I would recommend playing Final Fantasy X-2 directly after completing Final Fantasy X, as you will want to be familiar with the characters and settings from X during X-2. One of the most attractive elements of X-2 gameplay is nostalgia: Because X-2 reuses many of the characters and settings from X, you'll constantly be thinking, "I remember what I did here back in X," or, "There's that character from X!" The visceral trip down memory lane during a brand new game is a fairly unique experience in video gaming, even as the jarring differences from the original game will probably have you wishing X-2 was more like its predecessor. Beating the game was not difficult, although occasionally I needed to rely on this or that online strategy guide to help with a monster or two. By and large if you find a good spot to power-level and max out your abilities on all your dresspheres, you can beat 99% of the creatures in FF X-2 -- including the final bosses -- by sheer brute force. You may also need to hit the strategy guides to find a side quest or two -- the side quests are pretty imaginative and usually worth playing just for the variety, even if the payoff items don't always seem worth the effort. That last bit is pretty much a good one-line review of the game overall: imaginative, and especially innovative for its use of nostalgia and new systems at once, but I doubt you'll reach the end of the game feeling the quest was worthwhile. So make sure you hit every side-quest possible, as you'll likely want to make this a one-and-done experience.