Nothing is perfect, but this is damn close.

This has to be the hardest game I've ever had to review. And not for the typical reasons. On one hand everything was executed with near perfection. Amazing graphics, serious sound, solid single and multiplayer gameplay. And Yet, I can't help but feel like there could have be...Lire toute la critique

Nothing is perfect, but this is damn close.

This has to be the hardest game I've ever had to review. And not for the typical reasons. On one hand everything was executed with near perfection. Amazing graphics, serious sound, solid single and multiplayer gameplay. And Yet, I can't help but feel like there could have been more to it on the multiplayer end. I know it sounds odd and even a little selfish considering what we get, but I can explain more later (or atleast I'll try). What Epic Games accomplished was sheer genius. The game that sits in my 360 is the best thing I've played in a long time. The single player campaign was fantastic if not a bit vague. This is nothing new when you consider Halo 2. The story wasn't very deep or fleshed out as it could have been. Perhaps it was saved for the sequel, who knows. What I do know is that from the very beginning things were left at your best guess. A fictional Earth like world known as Sera was invaded by a subterranean race dubbed the Locust. While their actions were very clear, their motive(s) are not. The Serans couldn't handle their attacks so they sacrificed their world at the sake of leaving it to the spoils of the new invaders. (I still can't see how a group of rag-tag soldiers could change the tide of what the whole world could not. But it's forgiveable considering the grandeur of the game.) Sounds like a great set-up, but unfortunately that's all it was. Hold on! That's not necessarily a bad thing. The rest was pure action from beginning to end, Non stop. Although this game is better fit for a full screen of your own, it's easy to get into a split screen co-op game with something 32" or better. I myself have played 6+ hours with my brother-in-law and a friend on a 53" Projection on co-op. It was beyond awesome. After all those hours, a deep plot was the furthest thing from our minds. What helped make all that fun happen was the many ways to bring your opponents down. You can do the normal thing and just shoot your opponent dead, or you can do just enough damage to render him helpless on the ground for something more serious. This is the fun part. After they're on the ground gasping for air, you can opt for 1 of 4 methods of execution. You can simply shoot to kill, "curb Stomp" (Ever seen American History X? Yeah like that.), Chain saw or do a melee attack. Oh the chain saw, I almost forgot! Yeah, that's the real kicker of this game, the staple if you will. There's this rifle called the "Lancer" which has a saw at the end instead of a bayonette. I'm surprised no one has thought of it sooner. Alright, lets back up a bit. I did mention there could be more to this game. And despite my accolades thus far, I still stand by what I said. All the story elements aside, it's the multiplayer that needed some extra TLC when it came to the content. That's not to say the multiplayer isn't great, because it is. But the 3 modes offered aren't really all that different from each other. There's Warzone, Execution and Assassination. Warzone is a straight forward team deathmatch (the better of the 3). Execution requires either a sniper head shot or an up close kill everytime. Meaning you can't shoot and kill a guy while he's down (not very realistic and just gives less advanced players more chances). Assassination has both teams vying to kill the other teams leader first. Who ever makes the kill becomes the next leader. I would have liked to see more modes of play. Something like "Attack/Defend" or even "Capture Points". 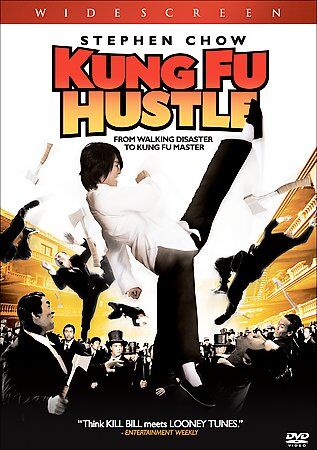 I've seen this in the theaters once before but it wasn't until I watched it on DVD a second time that I realized at how great this movie truly is. There is no other movie out there that can combine comedy and action so damn well, there just isn't. I was amazed at how much sl...Lire toute la critique

I've seen this in the theaters once before but it wasn't until I watched it on DVD a second time that I realized at how great this movie truly is. There is no other movie out there that can combine comedy and action so damn well, there just isn't. I was amazed at how much slap-stick comedy could be found in an action Kung Fu film (although Jackie Chan's films do it well, but in a different way). At one point you'll be laughing because it's so funny and rediculous and then the next you'll just tense up with excitement watching all that cool choreographed Kung Fu. You'd think with all the Loony Toon type shtick going on it would ruin it's chances of being taken seriously, not so. I just love the way this film changes gears and never loses pace. While watching this I was left with such nostalgia for my past favorite Kung Fu films. Even the way this was shot, it almost seemed like I was just sitting back and enjoying an age ol' classic. Than at the same time I'm thrown off kilt by the slap-stick humor and fantastic special effects, and as we all know this is the perfect recipe for keeping people interested...atleast when it's done right. And it was. Remember what I said about "changing gears"? Yeah, it does it very well. One moment it's a spoof and the next it's an intense fight scene. It's almost as if the funny stuff was to give you a breather from the action. Now if you know my writing, you'll first notice I gave KFH a 5/5, a first for me here at eBay. That's not to say this is the best movie of all time, but it's definitely the best movie of it's kind. As funny as this movie can be, it makes Couching Tiger Hidden Dragon look like the real joke when it comes to choreography. This one just hit the nail on the head and gave us Kung Fu fans something to be proud of. Kung Fu Hustle is like Disney World, you'll never see everything your first time through. I've seen this a dozen times and always pick up on something new. This review just doesn't do it justice alone, go see it for yourself! 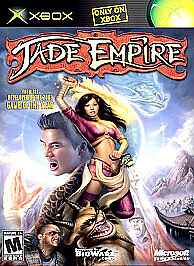 The first thing I noticed while playing Jade Empire was the lack of Character customization, and no I don't mean the traits and abilities like Mind, Body and Spirit upgrades or even the fighting/support styles to which their linked. I'm talking about the visuals, stuff like ...Lire toute la critique

The first thing I noticed while playing Jade Empire was the lack of Character customization, and no I don't mean the traits and abilities like Mind, Body and Spirit upgrades or even the fighting/support styles to which their linked. I'm talking about the visuals, stuff like outfits and armor. It just didn't seem right that aside from the color of my alignment (open or closed fist), my character couldn't sport any new looks like was done in KotOR. By the end of the game my character looked just as he did when he was an apprentice at the Two Rivers training school. Eh, but in the scope of things, it's not that big of a deal I guess. A more major issue was the fact that hardly any of JE's characters had even the slightest Chinese accent. There were two characters that I remember vividly with voices that just made me cringe. One was a overly happy guy in Tiens Landing who sounded like some creepy used car salesman and another guy in the city fighting arena who sounded like(and I kid you not) "The Comic Book Guy" from the Simpsons. It all just seemed so wrong and out of place. Another thing that was reintroduced was the dialogue trees used to give players the ability (some would say "illusion") to choose what to say towards NPC's responses. Don't get me wrong, it's not a terrible concept, but after awhile you'll find yourself skipping whole conversations because it's all so predictable and long-winded (although the evil responses tend to be somewhat humorous at times). I was also a bit annoyed that the games ending(s) weren't very spectacular or epic (although the one big twist at the end had me scratching my noggin in wonder and confusion, I was definitely caught off guard. I was kind of hoping that I'd get some 3-5 five minute eye candy for my troubles and not just some lame "where are they now" thing done completely in text. Although if your patient enough to stick around for the credits, you'll get some funny dialogue going on with a familiar character. Okay, so you've read what seems to be a lot of negativity on my part so far and your wondering why I still gave JE a 4/5? Well simply put, this was a very solid game with a good story to boot. There were very rare moments to where I thought JE was either too easy or difficult, and that's something that can sink a game. Look at Ninja Gaiden for example, now theres a game that's just way too difficult for it's own good. It's the reason why it's only liked by the very few die hard gamers who are gluttons for punishment. Than on the other side of the street you have all too easy games like Devil May Cry 2. But thankfully JE falls square in the middle. All-in-all Jade Empire is a beautiful looking game for the XBox and definitely worth the purchase (although you could probably rent it over the weekend given that it only takes the average gamer 15-20 hours to finish)