I'm very excited about providing great items to sell on Ebay! I am a huge movie buff and love to collect Peanuts character stuff. I have lots of cool stuff from awesome tv shows and movies so add me to your favs!!! 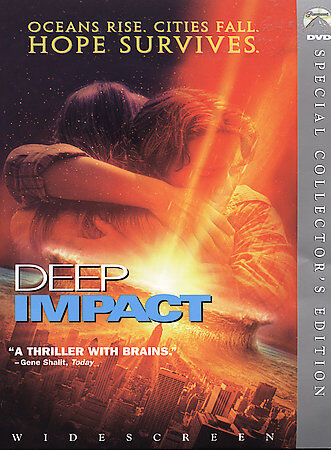 So one of many world-is-coming-to-an-end epic movies that came out in the late 90's, Deep Impact features a younger Elijiah Wood, a presidential Morgan Freeman, Téa Leoni, Robert Duvall, Vanessa Redgrave, and Leelee Sobieski to name a few. The plot revolves around a comet c...Lire toute la critique

So one of many world-is-coming-to-an-end epic movies that came out in the late 90's, Deep Impact features a younger Elijiah Wood, a presidential Morgan Freeman, Téa Leoni, Robert Duvall, Vanessa Redgrave, and Leelee Sobieski to name a few. The plot revolves around a comet coming to hit the earth and destroy all life as we know it in an Extinction Level Event or E.L.E. First we have Elijiah Wood who discovers the comet and all the kids at school say he'll get laid a lot more now. He was getting laid before?? Come on, he's a science geek in high school. We all know better. Also he has the poor judgement to save Leelee Sobieski by marrying her. And tries to take her family too but when that doesn't work out, she wants to stay with them. Great idea, sweetie. So you can die too. Then he even risks his life and comes BACK to save her! Is she thrilled to see him? Yes. Does she want to go? No. Her parents basically have say they'll see her soon just to get her on the back of his motorbike and they throw a baby at her to raise too. Then we have Robert Duvall playing the aging astronaut that the youngins' don't have any faith in but who shows his true colors and comes up with an idea that sacrifices them, but saves most of the planet and gives them a chance. I can't believe they even considered saying no. After all, they'd have to jump off the rocket when they got home and attempt to hide in a cave? And possibly have all their family members killed off? Part of the comet hits the earth anyway and causes some really fun damage. I always love disaster movies, especially when it happens to recognizable monuments like the Statue of Liberty underwater. This stuff is what you wait the whole movie to watch. However, if you are a sympathetic crier, the astronauts saying goodbye to their families will get you. Which brings up another character that gets to you. Téa Leoni was really fun to watch in Fun With Dick and Jane...a not very highly reviewed movie but great for what it was. She was not fun to watch in this movie. She was a reporter hungry for an anchor position and when she comes into the knowledge of planetary destruction, she mostly uses it for gain in her career. She has a few emotional moments about it. Particularly when her mother decides to end things on her terms before she gets washed away. Which brings up my other question -- Why didn't more people TRY? So many people just stood and took it and didn't even try to get away. Anyway when reporting these crazy big stories, she is the slowest talking person I've ever heard on T.V. I feel like I'm...waiting...for her to finish her sentences. Maybe it's being respectful, but no, she does it all the time. Only when she's reporting the news. She gives up her spot on a getaway chopper to a friend and her child which is very nice and decides to go spend time with her estranged father and kill herself with him. On the one hand, it makes sense. She's created so many problems and her mom is dead and her relationship with her dad up to this point has been dead so she doesn't have much left except for her job. On the other hand, they could have made a good run for it. This again is a teary moment when she curls up to him and says, "Daddy" and I cried even though I was ticked off at her. This movie, plotwise, is not awesome. I haven't talked about Morgan Freeman much here because he doesn't do much besides make speeches and occasionally be grouchy. 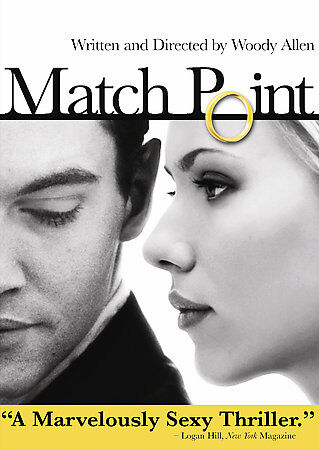 Match Point Directed and written by Woody Allen, it's as always very dialogue driven with many scenes of people quietly talking to make you pay attention to what's going on. Starring Jonathan Rhys Meyers (who I always think is John Rhys-Davis reading his name), Scarlett Jo...Lire toute la critique

Match Point Directed and written by Woody Allen, it's as always very dialogue driven with many scenes of people quietly talking to make you pay attention to what's going on. Starring Jonathan Rhys Meyers (who I always think is John Rhys-Davis reading his name), Scarlett Johansson, Emily Mortimer, and Matthew Goode, Matchpoint is a tale of deceit, betrayl, choices, and luck. Meyers plays Chris, a failed tennis player who befriends a rich fellow named Tom (played by Goode) and his sister Chloe (played my Mortimer) and eventually becomes engaged to Chloe and marries into their very wealthy family solving all his problems. This isn't enough for Chris, however, who falls into lust with Tom's fiancé, Nola (played by Johansson) and begins an affair with her. Eventually he gets her pregnant, something he is unable to do with his eagerly fertile wife and complications arise when Nola wants Chris to leave Chloe. This is something he isn't thrilled about because he's become accustomed to a certain way of living. When he takes matters into his own hands to remove Nola from the equation, it becomes a game of luck and deception as the cops try to get to the bottom of the crime. This movie quietly exudes a lot of drama as Chris casually lies to almost everyone he meets for the course of the movie for his own desires. It's actually quite sad at times, especially when you're trying to discern whether he has ever loved Chloe. He never took Nola seriously and used her as a plaything so you almost have to pity her as well even if she turns into a needy, half psychotic low self-esteem momma-wannabe. There is a cool scene where he literally confronts his own ghosts and tries to deal with some level of guilt. I won't reveal whether or not he gets caught, but I'll say it's a good watch. The characters are well portrayed. I find the portrayl of rich life to be a bit boring and snooty, but probably pretty close to accurate. Of course I'm horribly disappointed with the character of Chris and I think he never gets enough punishment for what he does throughout the movie. Both girls get lied to and treated horribly even though they don't really realize it that much. He's the worst kind of mooch, the mooch who swears they don't want to be one but is really sucking everyone dry throughout the movie. He never even gets substantially upset, always soooooo composed. It's scary how even he is. Check out this movie, it gets a B+ from me. 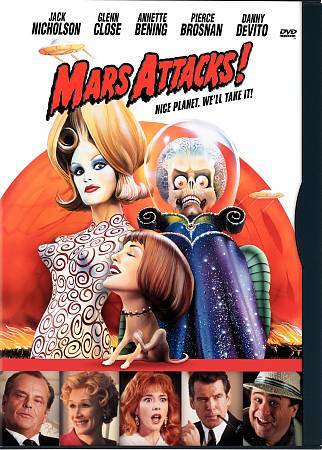 Directed by Tim Burton and released in 1996, this movie features Jack Nicholson, Annette Bening, Glenn Close, Natalie Portman, Lukas Haas, Jack Black, Michael J. Fox, Sarah Jessica Parker, Pierce Brosnan, Danny DeVito, Pam Grier, Martin Short, and Christina Applegate among others. The better question is, who isn't in this movie? The plot revolves around the age-old tale of Martians coming to Earth and invading. At first due to communication problems, everyone believes it's a misunderstanding and it isn't. Jack Nicholson is one of my favorite Presidents, mostly for his oration particularly when delivering the line, "I want the people to know that they still have two out of three branches of the government working for them and that ain't bad." Glenn Close plays the first lady who wants to redecorate the White House and Natalie Portman plays their brooding teenage daughter. It's a shame Natalie isn't in more of the movie. But I guess when you have all these big names going on and Jack playing two roles at once, there just isn't enough screen time to go around. Yes, Jack Nicholson also plays the owner of Galaxy hotel in Vegas and is married to an unhappy Annette Bening who turns to her crystals in times of crisis. Her space cadet quality has many humorous moments, but can get a trifle annoying when her voice approaches a certain octave. Sarah Jessica Parker has always annoyed me and this movie is no different. Her character constantly primps herself and doesn't have an intelligent bone in her body. However, justice comes in and has her switch bodies with her little purse dog. She shamelessly flirts with Pierce Brosnan in this form, which is fantastic because he has been reduced to a floating head. All of this occurs because the Martians are a little experimental. I really enjoy Pierce Brosnan as the "Professor of the White House" because it's hilarious to see him puffing his pipe and reasoning that advanced beings are enlightened and therefore peaceful. I can imagine him as the professor on Gilligan's island, it would crack me up. Let's see, other sub-plots. Lukas Haas, an actor we don't see enough of although he did appear in the first few episodes of season four of 24, plays a poor doughnut shop worker who is looked down upon by his family for not going around shooting everything he sees like his brother, Jack Black. Jack Black trains putting weapons together with a blindfold on and huffs and puffs into battle. At the first sign of action, he runs up to the aliens, delivers a sassy battle cry, and proceeds to be unable to fire because his gun falls apart. Karma, sweet karma. Don't worry, fans. I'm sure he'll rock it out when the Tenacious D movie comes out. Anyway, Lukas Haas and his grandmother save the world when they realize her horrible country crooning record makes the Martians' heads explode. Let me just say I love Pam Grier in this movie in particular. If you haven't seen Jackie Brown, run, do not walk, to the nearest Blockbuster/Video rental store of choice. She plays a mother who has a difficult time keeping an eye on her children but works hard to raise them right. My favorite moment is when she spots them in an arcade after not being home for two days and promptly stops the bus she's driving to drag them home. The bus applauds. So did I. She is separated from Jim Brown who does an honorable job of facing down the Martians old-school boxing style to help friends get away. Good, not great movie.