This account will be used for sales until business account sales limits are increased. 100% buyer satisfaction guarantee, if you have a problem with your order or have even just changed your mind contact for a 100% refund and we pay return shipping.

I can feel the difference between the 9 and 10 paddle tires I have used. Quality rubber, good size paddles, easy to get on. All around good product. 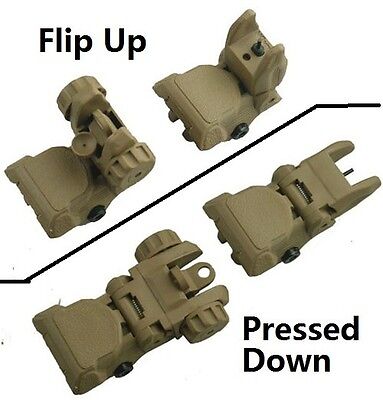 Front and Rear Polymer flip up back up sights CQB Tan

Easy to use and install

Great value for these sights. Very easy to install and use. I can see them through my EOTech no problem. Only downside is the front sight can be hard to find with peripheral vision while looking at target.

There’s no need for plot synopsis in this review, the overarching plot of the game was never its focus, nor even a concern. Instead developer Game Freak one-uped the fledgling industry by making the game about the visceral emotions that have long inspired human beings to cre...Lire toute la critique

There’s no need for plot synopsis in this review, the overarching plot of the game was never its focus, nor even a concern. Instead developer Game Freak one-uped the fledgling industry by making the game about the visceral emotions that have long inspired human beings to create, relate, compete, and acquire knowledge, and for that reason, along with its exceptional use – and expansion of – traditional role-playing elements, Pokemon Red and Blue remain one of the greatest games in the history of the medium. Pokémon, in my eyes, appeals to two camps. Those that are the admitted completionist, the antiquated equivalent of someone who aims for the full 1,000 GS on the latest 360 title (or platting for my PS3 folk) and those that choose to wander not because they’re lost, but because of the pure explorative urge they get to see everything the world has to offer. Proving even as early as ’96, Nintendo had its finger on the pulse of what components made games great. For the completionist, this is their virtual playground. Between catching, collecting, and learning the minute details of 151 detailed creatures, analyzing the game’s inherently deep battling system, and exploring every nook and cranny of the extensive Kanto region the game never pigeon-holes the player into any one style of play. Coupled with the ability to converse and trade with anyone else into the scene, the game delivered in spades for those of us whose lives revolve around lists. Honestly the team at Game Freak could’ve stopped there and commercially, the game would’ve succeeded. Fourth quarter sales would’ve been big, in a post-2001 world Blue and Red would’ve scored an above-average score on metacritic, and the corporate big-wigs would’ve accumulated barrels more money to roll around in at night. But what makes this game truly outstanding is the developer didn’t stop at “good enough.” Then the exploration kicks in, there’s an entire world full of NPCs and a cast of characters just as varied as the monsters themselves. The inept professor too old to fill a device that he spent years developing, the rival who apparently never learned the proper way to part ways (“Smell ya.” Really, Game Freak?) and a score of gym leaders infatuated with beating up children daily, each one brought another talking point, and though separately irrelevant, together ground the game in reality. Surprisingly, at least in accordance to today’s gaming landscape, there’s no filler. No fetch quests, no “defeat 10 Digletts, then return to see me,” and especially no escort quests. The game thrived on giving players the keys to their own experience. If they chose they could’ve waltzed through the game with an empty pokedex, one mega-powered monster and an empty inventory, never leaving the confines of the first town. There’s an unparalleled amount of freedom in the game, and for that Pokémon deserves to be commended. Up until now (and thanks for bearing with me) this review has been about the mechanics and faux-philosophical reasons this game has had the longevity as a series and continues to succeed both commercially and critically. Let’s change this a bit. As an RPG the game’s plot successfully led the core of the experience, generating a series of obstacles that became ever-more possible through leveling and building a team. Pacing is outstanding the whole way through and though road bumps arise (I’m looking in your direction Victory Road) the game never actually grinds to a halt as much as it does a controlled crawl. But more important than pacing and plot was the core battling system that incorporated the long-standing random encounters of JRPG past and shaped them to fit the form that Pokémon was attempting to fill. Elemental strengths and weaknesses collided with stat-based number crunching and tactical tom-foolery, giving clear advantage to players who knew the ins and outs of the game. Move sets, evolution requirements, and the faux-rock, paper, scissors of the experience melded together in the mind of the practiced player, encouraging more than a brief one night stay in the land of pokeballs and safari zones, but instead making available to players a home to return to when the droll offerings of the latest titles seem to offer little refuge.