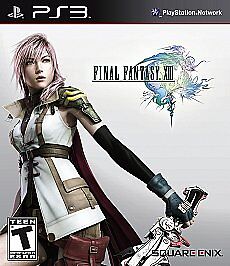 I have been a fan of the FF series for a long time, and I wanted to see how they continued with the hi-def abilities of the PS3. Now, the gameplay is a little different from previous games, but it does not disappoint. To start, don't expect to be wandering around an open wor...Lire toute la critique

I have been a fan of the FF series for a long time, and I wanted to see how they continued with the hi-def abilities of the PS3. Now, the gameplay is a little different from previous games, but it does not disappoint. To start, don't expect to be wandering around an open world looking to find the next mission or battle, because the entire game is a set path that guides you on your way. Although this was a little bit of a bummer, they made up for this with extremely vibrant backgrounds and details of the worlds you travel through. There was never once a point at which I thought, "wow this is getting really boring." The battles are pretty much the same, you select your attacks and targets, switch what kind of attack style your team will perform with, etc. What I really like is how they almost did away with a level system, but continually added more features for fighting through the first half of the game, so you got to build on your original abilities and add more skills as your opponents get stronger and more difficult. Somewhat like the level system, but more equalized. Another part I enjoyed was playing as several characters, as the story line switches off between the different character's motives and goals. I would say one of the major downsides to this game, however, is the fact that nearly a third of the time spend on the game is watching cut scenes or 2-5 min videos. They look beautiful and entertain for a while, but if I wanted to watch an anime movie, I would have bought one in stead of this game. So if you get bored easily watching cut scenes, this game might not be for you. If you can live with it, or just don't care about the story and skip the vids, then you should be fine. That's about all there is to the game, great story that's different from other FF games, but still as crazy and action packed as it has ever been. One final note that I couldn't help but adding in, if you listen carefully during cut scenes, it almost sounds like the characters are having sex. They make random gasps and moans while looking around. If I weren't looking at the screen and didn't know any better, I'd say I was listening to a hentai porno hahaha I mean it's not distracting or anything, I'd be in awe at some of the places they visit in the story, too, but come on, the Square Enix crew could have chosen better voices and expressions to fit the scenarios.... Well, that's all for now. Great game overall I'd say if you can get it for under 20~25 bucks