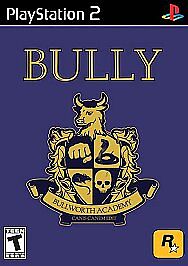 This game will grow on you and gets better and better the more you play it! It isn't your regular mindless game; if you aren't mentally sharp, you won't be able to pass it! Rockstar has taken a great concept and made an excellent game. You are a short tough guy that spends...Lire toute la critique

This game will grow on you and gets better and better the more you play it! It isn't your regular mindless game; if you aren't mentally sharp, you won't be able to pass it! Rockstar has taken a great concept and made an excellent game. You are a short tough guy that spends his time between going to class, dodging bullies, and hitting on girls. The REAL game happens when you get off campus. It is a whole new world that opens up and it really gets to be a ton of fun. The part that I really respect about this game is that it really challenges your mind in a way that I have not expected from Rockstar. For example, when you go to English class, you they will give you 6 letters that are scrambled, and in 3 minutes you have to think of as many words as possible out of those letters! Some of them can have as many as 40 or 50 potential words and you have to at least be able to come up with 50%! And it's not like a typical game where you can just come right back and try it, you won't be able to try it again for a few real life hours! Another challenge is to push the exact button on the control pad at the exact second. They have taken it a step further because they have full animation playing in the background so distract you, with your teacher talking to you and trying to throw you off. Each time it uses more and more buttons in a totally random fashion. The story line is also fun with so many mini quests it will keep you playing and entertained for hours. The one reason that it is not a 5 in my book is the load time. It seems to take forever to load up the game initially, and then every time he goes to a new scene, it takes forever to load. The graphics are good, but not for the level of load time. It loses a bit of the momentum every time. Beyond that, once you get the hang of the controls and then get off the campus, be ready to become further addicted! In regards to the violence for kids, the only good thing is that no one ever actually dies, and there isn't any blood. Just kids laying on the ground like they were kicked in the stomach. If you learned something new here, take a second to review it. Thanks and have fun!

This is an excellent monitor with a very clear display. It is a black monitor with a flat screen and amazing picture quality. I would definitely recommend this to anyone who is looking for a desktop monitor.