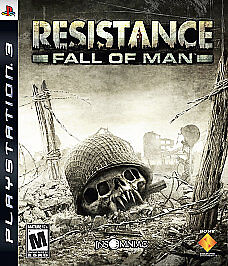 Resistance: Fall of Man is one of the first ps3 fps games! I used to own it right when It came out, but I sold it later on. I just recently bought the same game that was 50$ for 10$ =D! The plot of this game is awesome, some new guns compared to other games like call of duty...Lire toute la critique

Resistance: Fall of Man is one of the first ps3 fps games! I used to own it right when It came out, but I sold it later on. I just recently bought the same game that was 50$ for 10$ =D! The plot of this game is awesome, some new guns compared to other games like call of duty world at war, and this is a Sci-Fi game folks! You get to use alien or chimera guns, and you can even play as an alien character. Online its Chimera vs. Humans. 60 player online i think it has? Also you can use this game to bypass patches in ANY PS3 GAME so people use this to bypass patches typically for call of duty games. For instance if you do the bypass with some edited files as your call of duty save file you can do any of the major hacks that infested online. BUT you'll be playing with the people that DON'T have the patch so basically all the hackers. What they do is rank up, gain xp, get everything for the online game, and fool around. This game was one of the first games I played, and I could never beat it. I just couldn't for some reason I got so close to the end too I could tell because I played through like all the levels. Graphics are incredible of course! You'll see better in Resistance 2. but the graphics of Resistance Fall of Man are still pretty damn good you won't be disappointed. I'd say that the only real con of this game is that once you beat it twice or even just once you WILL PUT IT DOWN. Because playing online isn't as fun as other games such as Call of Duty. Suspense, terror, blood shaking, and fantastic describes this game. Just remember only buy this for like 10-15$. 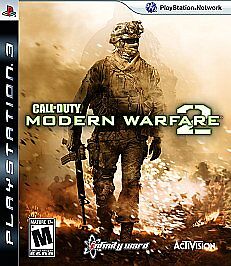 I bought this game a while back around the time when it first came out because I thought It would be a really good game just like its predecessor Call of Duty 4: Modern Warfare was. I beat it on Veteran, played co-op, arcade mode, etc. Online playing people on the internet w...Lire toute la critique

I bought this game a while back around the time when it first came out because I thought It would be a really good game just like its predecessor Call of Duty 4: Modern Warfare was. I beat it on Veteran, played co-op, arcade mode, etc. Online playing people on the internet was what I was really into doing because otherwise you just beat the game and sell it because playing the game over and over again gets boring. Pros: Fun campaign, new arcade mode, co-op amazing, and multiplayer has new features like host migration etc. Cons: The only major cons are all for multiplayer, not really any for single player, co-op, etc. For Multiplayer- Hackers have messed up the leader boards so any of you guys that want to get up to the top on the leader boards can't do it because of the hackers. Call of Duty 4: Modern Warfare, and Modern Warfare 2 have serious problems with "hackers", and "glitchers". Sooner or later you will run into them, the glitchers will exploit in game mechanics to get in a spot you can't get to thus having an advantage. Hackers are pretty rare, if you ever see them they're usually getting all the kills. They'll fly around or spawn right in front of you on Search and Destroy ( a game mode which only gives you 1 life per round ). If you are a hardcore gamer...you'll hate a lot of things about multiplayer. Online players will put on a ability, they call them "perks" which allows them to do certain things other people can't do unless they have that specific "perk" which you can choose once you've gained it. Anyway, One man army "perk" aka OMA has ruined the online gameplay. One man army allows anyone to sit in one spot and have unlimited ammo for guns, explosives, equipment, and other things. So people will "camp" or sit in one spot with grenade launchers, or "noob tubes". They will get enough kills, and get a "Killstreak" basically you can call in stuff. Like Helicopters, Radar, etc. So people will camp just to get those killstreaks. Most of the killstreak are overpowered or not at the right amount of kills. At 25 kills from noob tubing or camping. That player can use the "Nuke" killstreak which kills everyone, and ENDS that game. They can also call in other annoying kill streaks that are for killing you. Knifing has become "Unrealistic" by far, because of the "Commando" perk, and the tactical knife. You can knife somebody from super far away like this, |=person =knife. | ............|. The person on the right could die in like a second. This goes for Modern Warfare 2 and Modern Warfare, whenever you leave a game, and you go back to the same game mode. Usually or more often then not you will be put back into that same game you just left. Yeah you can't choose what game you go into like you can on the computer for Ps3, xbox360, etc. "BOOSTERS" are friends usually that get to together go to "Free for All" game mode or others. Go on opposite teams ( so they can kill each other ) they get the "Tactical Insertion" equipment which makes it so when they die they "respawn", or are born again because there's more then one life, where the tactical insertion is. So boosters hide in a spot somewhere, and do that to get killstreaks. Then ruin the game with them. There's TONS OF THEM...Also sometimes the matchfinder that gets you into games will get you into a game that's already finished. The Map packs that are offered cost ALOT like 15$ each. Mw2 has a lot of good things about it, but too many bad to play online a lot. Call of duty 4 Mw2