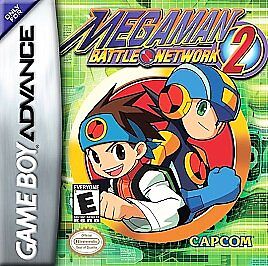 THIS is a Sequel and how they should be done. Excellent follow-up game.

Battle Network 2 is the perfect follow-up to the first Battle Network game. It has everything the first one did but more and bigger story and more chips to use in battle. The new things since the first game. It introduced the * code. A wildcard code that can be used with AN...Lire toute la critique

THIS is a Sequel and how they should be done. Excellent follow-up game.

Battle Network 2 is the perfect follow-up to the first Battle Network game. It has everything the first one did but more and bigger story and more chips to use in battle. The new things since the first game. It introduced the * code. A wildcard code that can be used with ANY lettered code, making combos much easier to create. The biggest introduction is the Style Changes: Guts, Team, Shield, and Custom Styles. After you acquire a certain plot item you will encounter a Style change ever 280 battles. Based on what chips you upload to MegaMan during the custom Screen or how you choose to battle, MegaMan will eventually learn a new style which helps your fighting style the best. Guts Style is for those who love to use their busters the most. My personal fave style. Your buster power is doubled, you don't flinch when hit nor lose your charge when hit as well. If you love using your buster this is your style. Shield Style is for those who love to be defensive and counterattack enemies. It starts you with a Barrier which protects you from 1 hit and by pressing B + Left you gain a shield on command for a second to block as well. My 2nd fave style to use. It even defends against AoE attacks like Bombs. Team Style is for those who love to use Navi Chips in battle the most. It allows you to carry 8 in your deck instead of the default 5. Awesome for almost sure fire hitting attacks on enemies. Especially Roll Navi chip abuse. Custom Style is for those who love to upload a lot of battle chips to MegaMan and/or use Program Advances a lot. It lets you start with 7 chips instead of 5 and if you add you can get up to 10 chips at once instead. Making combos and Program Advances much easier. These 4 styles make the game VERY enjoyable since it will literally adapt to your gameplay style. Also each style gets a random element attached as well in Heat, Aqua, Elec, and Wood. Each element only changes your charged buster attack and gives you that elemental advantage and its weakness as well. There's a secret Style as well... The story is roughly the same as the first. A new criminal organization has risen and wants to rule the world. Enter Netmafia Gospel, an organization that hates society and you as well. The things they do to people are much more diabolical than WWW in the first game. These guys are out for blood it seems and for a game more for kids...maybe I'm reading too much into but these guys mean business. Though if they can be stopped by a 10 year old and his Navi they can't be too threatening eh? Joking aside the threats are bigger this time around and most of the enemies have a reason for why they hate the world or something like that. There are much more areas to explore and the networks you go to are easier to look at and make it easier to tell if you are on a high path or a low path. The music is pretty good and the graphics are about the same as the first one. If you enjoyed the first game then THIS game will make you forget the first game even existed. Its SO MUCH better than the first and not once did I feel bored with the game. The enemies are much harder here and will kick your ass if you take em too lightly. Just like the first, all enemies have certain patterns and characteristics to them but with more terrain obstacles and more difficult enemies, its a blast going through all of the game. Pick this up if you want to try a Battle Network game. This or the first but I recommend this one overall. 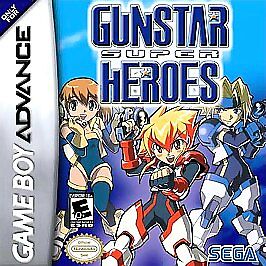 Gunstar Super Heroes is a sequel to the original Sega Genesis game: Gunstar Heroes. While it is a sequel, its also, almost, a retelling of the first game. Many of the stages are the same, level design, enemies, bosses, there are some new gameplay elements and altered stages ...Lire toute la critique

Gunstar Super Heroes is a sequel to the original Sega Genesis game: Gunstar Heroes. While it is a sequel, its also, almost, a retelling of the first game. Many of the stages are the same, level design, enemies, bosses, there are some new gameplay elements and altered stages but a good chunk of the game feels exactly like the original game, but now on a handheld. Story You play as Red or Blue and take orders from Yellow (look at the box art and you should tell who's who). Some empire wants to ressurect Golden Silver and destroy the world and needs 4 gems to do so. The heroes of the first game got the gems, lost them to the bad guys and powered up Golden Silver and it was defeated. Same exact deal here only the heroes are a new generation. The Empire wants to ressurect it and needs 4 gems to do so, you get the gems, lose them, then fight Golden Silver again. Hardly a story but oh well, a fast action game like this normally doesn't have a riveting story. Gameplay Both play exactly the same and have 3 weapons to choose from. 2 are the same but the 3rd is exclusive to the character. Melee/Jumping is done with 1 button and shooting with another. By holding up and jumping you do an uppercut jump attack. Press jump in the air, or with another direction and you do an aerial attack in that direction. Really simple control and its beautiful. Shooting done with another button and you can fire in 8 directions. Also beautiful. There are explosions everywhere and tons of enemies to gun down and melee your way through and its a blast the whole time. There are only 5 levels. Intro Stage, 4 Gem levels, and Final Stage. But you will die. A lot. There different shooting styles like in the first game which gives you control options and 3 difficulties to select though so take your time going through the stages but it is a challenging game for the most part. You have a numerical life counter and if it hits zero, game over, start that stage all over again. There are only 5 stages so being sent back to the beginning of the stage is a fair punishment I find. The levels aren't super long but short to medium length bursts of hardcore action. Gunstar Heroes (GH) vs. Gunstar Super Heroes (GSH) GH had better weaponry options. There were 4 weapons in GH; Force (Machine Gun), Chaser (Homing shots) Lightning (Went through enemies to hit more behind) and Fire (Shotgun) and you could carry 2 at once to combine their effects and that was AWESOME. Though this meant you had to find the power ups in the field and exchange em in the heat of battle if you wanted something new. Not a big deal though. GSH however only has 3 weapons Chaser, Fire, and Red gets Force, and Blue gets Lightning. However in this each weapon has a Super weapon that you can activate when the weapon gauge has energy in it to unleash a very large and more powerful version of the attack. GH Characters were pretty bland but GSH characters were more fleshed out and had more character to them. Wasn't much but it was better in GSH. Overall This game is awesome and is a definitely good add for any GBA library. Its short, but pretty damn hard at times but still very fun to play. With 3 difficulty settings you can easily up the ante when you're ready to have a really good time on harder difficulties. Great game, you chould definitely get it if its up your alley, or pretty cheap. Its much easier than Contra games I'd say since you don't die in 1 hit but it can still be hard and awesome~ 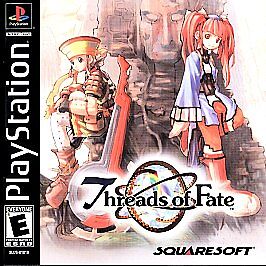 Compared to games now. This is STILL damn fun stuff.

Threads of Fate. A game many many gamers who grew up on Playstation and Squaresoft (when they were GOOD) may know and love. As a kid I never heard of the game but I did like Squaresoft if only because I played Brave Fencer Musashi and loved it to death. In fact both games pl...Lire toute la critique

Compared to games now. This is STILL damn fun stuff.

Threads of Fate. A game many many gamers who grew up on Playstation and Squaresoft (when they were GOOD) may know and love. As a kid I never heard of the game but I did like Squaresoft if only because I played Brave Fencer Musashi and loved it to death. In fact both games play similarly. You pick a character and play their storyline. Though the game is pretty linear its replay value is pretty good since the game is simple, fun, and challenging. I never played this game when it was released 12 years ago. However I bought it because current games TODAY are unappealing, uninteresting and have too much hand-holding. So I looked up older games that were good and this game up quickly among others. This game. Is one of the best games I've played in a while. One character is physical and can change into monters he defeats and use their abilities (Kirby much?) The other is a mage who learns a a few spells like Fire, Water, Wind, Lightning, Dark, Light and then different styles to use them like Normal, Spread, Power, Hyper, Area. Mix and matching spells and styles is stupidly fun and simple. The game is very easy to learn and simple to play too. Though its an RPG you only "level" up 2 stats. Your HP and MP. Your Max HP goes up the more hits you take, however before you can even think to take advantage of that, there are NO healing items in the game (except for the random times you kill an enemy and it drops a health pot) and your Max MP goes up the more you use Magic abilities. So spam your skillz! ATK and DEF increase simply by buying equipment or stat increasing items. Simple, effective, works. The game is Action Adventure RPG so all battles are real-time on the field. Like Zelda. The game is great as has New Game+ features as well with a great story and a handful of great characters you'll love and hate you'll wish more games nowadays were as good as this.