I'm a seller who just tries to turn in stuff he has collected into money. Note: I normally don't accept returns unless the product that is delivered is not as described. Please contact me if there's a problem. 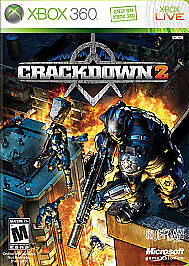 Prelude: Crackdown 1 was a fun game, that ran a little short and has the distinction of being one of the only million seller games that was bought specifically for the demo on the disc (in this case Halo 3 beta). However the original game was enjoyable if not all together ...Lire toute la critique

Prelude: Crackdown 1 was a fun game, that ran a little short and has the distinction of being one of the only million seller games that was bought specifically for the demo on the disc (in this case Halo 3 beta). However the original game was enjoyable if not all together there. There is the framework of a fun and enjoyable game that could have been released if it was held off for 6 months. And as such the sequel is sure to be amazing. "Story"/Theme: This is not that sequel. Unfortunately Realtime Worlds went off to produce APB which is another game that suffered from similar flaws (namely not being that much fun). However Crackdown 2 is now made by Ruffian Games, and while it's not the sequel that was promised by the potential of the first game. What comes out is still quite enjoyable. Gone are the days of having to kill 27 bosses. And now we have 27 locations to take over. In fact bosses are all together gone, and the only thing left is epic battles. Which is something the original game lacked as the player could gain the highest power levels and vault everyone and blow up the boss (who could take multiple head shots with no helmet... go figure). But in addition to 27 locations, there's freaks dominating the city at night. It's almost like a zombie horde, and even better? they walk in the street (free driving skills). The player has to take them out, and while killing the horde is fun, there's not enough power, instead you have to gain beacons, which allow you to create larger bombs to take out the large dens of evil. Once you take over tactical locations you get support in the form of weapons and vehicles (and less enemies), and taking out the freaks lowers the freak numbers but there's still small dens of them that you can take out personally. Overall the idea is refreshing from the first game, but just not that good overall. It's more action, true, but if this was the first game it still would be a disappointment. The Good: Well the new theme is fun, and better. Co-op is a constant blast, they've added 80 orbs that can only be grabbed when a team mate is around. The 500 green orbs and 300 blue (hidden) orbs are back and they are still a blast to capture. And while the city is the same as the first game, it's been demolished quite a bit, so locations are familiar but new. In addition this is the one game where you feel like you're a superhero. Not since spiderman 2, has it been so much fun to fly through a city, and explore. The Bad: There's almost no story (though more than the first game), there's a lack of unique things to do. While the areas of the tactical locations and freak dens are different, they aren't different enough to fool you into thinking it's that different every time. The freak dens are the one unique part, with different locations for enemies, however that only illustrates how un-unique the rest of the game play is. In single player the game just is a little dry (and harder) but in multiplayer the game becomes much easier, but if your other multiplayer buddies run ahead and do all the events, your character might not even need to move from the start location to see the end cinema. With a new character and a friend playing a evolved character, the new character is going to be radically weaker for a long time. Though you do level quickly and it's fine for buddies helping each other out. It just doesn't work when you allow either character to progress in the city.