Longtime Ebayer (it definitely helped me scrape by in College) and AVID videogamer (and PC Game Developer). 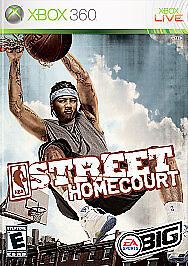 Is Homecourt as good as Street Vol.2?…Not so much.

Review care of http://gnadegames.blogspot.com Don’t get me wrong, NBA Street is by no means a bad game. In fact, it is chock full of high production values and is a vast improvement over Volume 3. Despite all of this, Vol. 2 is still the best in the series in my eyes. Game...Lire toute la critique

Is Homecourt as good as Street Vol.2?…Not so much.

Review care of http://gnadegames.blogspot.com Don’t get me wrong, NBA Street is by no means a bad game. In fact, it is chock full of high production values and is a vast improvement over Volume 3. Despite all of this, Vol. 2 is still the best in the series in my eyes. Gameplay: 8/10 Pros: The new gamebreaker system is great and offers a good system of risk and reward (opposing players can ‘steal’ gamebreakers). The fluidity of animations and the countermoves (a button appears over a ball handler or defender and if you press it you will bounce the ball through a defender’s legs, or steal the ball.) are also great additions. Cons: The intuition of the kick pass (press down on the right stick) is gone! Blocking long range shots is way too easy and makes games dunkfests. Trick Remixer brings with it a lack of differing dunks, trick moves. Graphics: 9/10 Pros: The graphics are good, the player animations are absolutely superb and the game has an organic overall feel because of the look and especially the animations of all the players. The filters put on the gameplay and ‘biography’ videos are sweet. Cons: The courts are not that spectacular and don’t offer the variety of looks and tones (rooftops, dark alleyways) of previous street titles. Sound/Music: 9/10 Pros: As always EA has spent a fortune on licensed tracks which are excellent. Voice work for the player biographies is excellent. Cons: Voice work is a mixed bag during gameplay. It bothers me that we get great Carmelo voice work for in between game segments but then have generic player voices for nearly all the NBA stars. Players just all sound the same in game- generic. This may be nitpicking, but why not get voice work from all the players or just rip it from game footage? I want Iverson to sound like Iverson. Lasting Appeal: 7/10 Pros: Online play is great (something Vol. 2 lacked) and there area several different game modes, and street games to be played. There’s achievements and all that too. Cons: Achievements are incredibly easy. There are only 16 and they are each worth an absurd amount (like 50 points). They are also incredibly easy to get and I had over 200 within the first hour. The flash of NBA street and it’s appeal has worn off over the years. Average: 82.50% Tilt: -0.50% EA is a massive studio (which I must admit I distaste ever since they monopolized the NFL license) and they crank out sequels nearly every year. As a result, their games always have the polish in the graphics and sound department, but the gameplay can drastically fluctuate from sequel to sequel. The Street series is lucky because it doesn’t suffer from the strict annual release schedule of Madden. Nonetheless, while Homecourt is much much better than Vol 3, it’s no Vol 2. Verdict: 82% 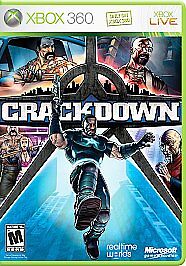 Crackdown is more than the Halo 3 Beta

Review c/o http://gnadegames.blogspot.com Crackdown is one of the most recent high profile releases for the Xbox 360. Not so much because of the game itself but the fact that buying Crackdown enables gamers to participate in the Halo 3 Beta. Many scoffed at Microsoft’s auda...Lire toute la critique

Crackdown is more than the Halo 3 Beta

Review c/o http://gnadegames.blogspot.com Crackdown is one of the most recent high profile releases for the Xbox 360. Not so much because of the game itself but the fact that buying Crackdown enables gamers to participate in the Halo 3 Beta. Many scoffed at Microsoft’s audacity to package the Halo 3 Beta with a game that many gamers viewed as poor. This is not the case (no surprise given my first impressions) and while Crackdown is by no means a memorable, epic, or innovative game, it does get one thing right- Fun. The game is just an all out blast to play- plain and simple. Gameplay: 9/10 Pros: Game is absolutely amazing in Co-op. You and your friend (or enemy) can do whatever you want and be wherever you want in the game world. Goof around and enjoy at your own will! The superhero attributes that your character receives is also genius and makes the game more and more fun as you jump higher, get stronger, and blow things up bigger. Cons: The “sandbox” lacks some of the diverse mini-games and missions of the Grand Theft Autos, Saints Rows, etc. You Race, Jump, and Kill bad guys- that’s it. If played solo, the single player game can be beaten relatively quickly and with less enjoyment. Graphics: 8/10 Pros: A unique- comic book style look that is by no means as sharp as most games on the 360. However, the streaming engine/world is much more impressive than the old GTAs on PS2/Xbox and there’s no draw issues or anything. The Physics and explosions are what really save the graphics from dipping further. Cons: Not nearly as impressive or wowing as most Xbox 360 games…except when a pile of cars explodes from your rocket. Sound/Music: 8/10 Pros: Explosions, guns, and all the other sound effects work great. The announcer is fun and catchy in a campy, lame way. Cons: Music and radio stations in the cars is a skimp and a joke- the standard has been set as far as realistic radio stations go in these games. Announcer is very…informative and talks a lot…I don’t mind him, but I can see where if you don’t like the campy feel- you’ll be very annoyed. Lasting Appeal: 7/10 Pros: Co-op probably has near infinite replay value…especially since you are free to come up with any antics you like. The game’s playability and great gameplay makes it hard to put down. Cons: Lack of variety in missions and what you do in Pacific City hurts. As a solo experience, Crackdown is definitely not worth the pricetag. Average: 80.00% Tilt: + 5.00% Here’s where the Halo 3 effect comes in…for me playing the Halo 3 Beta was definitely a selling point (well done Microsoft). Luckily, Crackdown is not a total bust and actually a game that captures being a super-hero a lot better than some of the Marvel and D.C. titles out there. It’s a blast to play…and Halo 3 with it just bumps it up another notch. Verdict: 85% 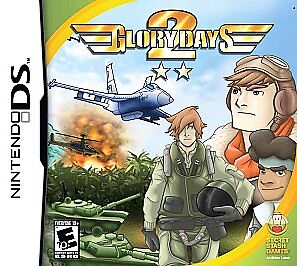 Glory Days 2 is a Great Surprise

You can read the entire review with video @ http://gnadegames.blogspot.com What a surprise! That's really the best way to describe this game. I wasn't even aware of the first game, but after I saw some action packed clips of this game I wanted to give this game a whirl. I'm...Lire toute la critique

Glory Days 2 is a Great Surprise

You can read the entire review with video @ http://gnadegames.blogspot.com What a surprise! That's really the best way to describe this game. I wasn't even aware of the first game, but after I saw some action packed clips of this game I wanted to give this game a whirl. I'm glad I did because Glory Days 2 combines hectic arcade action with strategy game elements. Gameplay: 8/10 Pros: Very Unique and different gameplay. Distinct vehicles with different gameplay mechanics and strategies, hectic arcade action- combination of helicopter rescue and sidescroller shoot em up. different time periods, tons of weapons, etc. Cons: Touch controls are awful. In long play sessions, gameplay can be repetitive. Difficulty can be frustrating since you usually lose because your army is stupid, not because you get shot down...it keeps you playing though. Graphics: 7.5/10 Pros: Tons of action, fast gamespeed and metal slug-esque graphics. Fantastic Parallax backgrounds give real depth. Cons: Certainly doesn't push the DS's power and your planes look pixelated when they change direction and turn towards the camera. Plus the generally zoomed out camera takes focus away from the destruction on the ground. Sound/Music: 8/10 Pros: Pretty epic war drum and battle music fits the mood perfectly. Sound Fx are arcadey and work well. Cons: Sound FX and music can be repetitive and doesn't differ enough between time periods. Lasting Appeal: 7/10 Pros: Multiplayer is a great addition even though there is no WiFi play. Campaign has different eras and is challenging. Battle mode helps you customize your own battle field conditions and continue playing after the campaign. Cons: Campaign is too short and can be beaten in a couple hours with some skill and diligence. No WiFi play is a real shame. Average: 76.25% Tilt: +0.75% Glory Days 2 is a great little game to saddle up with for a trip or quick play sessions. The gameplay is really unique... yet familiar and it's just plain fun to play (as long as you don't use the touch controls). Yes, the experience won't last that long if you play the heck out of it, but in spurts this game is great. It's a great idea and features gameplay that I would truly like to see expanded upon. One of the other great things about this title is that you can pick this game up for about $20 online. It's worth playing if you like shoot em ups or old school games with a little more depth. Verdict: 77%