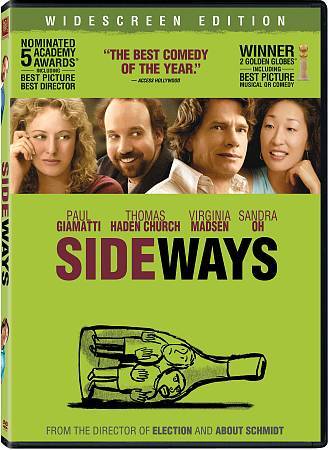 My wife and I had just returned from a drive through Napa, Sonoma, and Willamette Valley. We had visited 25 wineries in 9 days, tasted more cabs, pinots, and chards in one week than we ever thought possible, and along the way we read various books about viticulture. We retur...Lire toute la critique

My wife and I had just returned from a drive through Napa, Sonoma, and Willamette Valley. We had visited 25 wineries in 9 days, tasted more cabs, pinots, and chards in one week than we ever thought possible, and along the way we read various books about viticulture. We returned home having transformed into enthusiastic oenophiles. Let's relax in front of the TV and watch a movie, I suggested, so tired of driving. Our new purchase of Sideways had arrived while we were gone, and it seemed the appropriate way to end a great vacation. The story revolves around four character, two men on a drive through the wine country, and two women who the men meet along the way. Miles (Paul Giamatti) is a pathetic divorced man who dwells on his ex-wife, lingers a little too long over every glass of wine, and expresses himself in the writing of a lengthy manuscript that's destined never to be published. Jack (Thomas Haden Church) is a jock who's simply looking for a little action prior to throwing himself into a marriage we know won't last--a man who loves to drink but doesn't know the difference between a bordeaux and a burgundy. Maya (Virginia Madsen), a divorcee, is unimaginably tender and patient, sufficient to pull Miles out of his shell. Stephanie (Sandra Oh) is a hard-working single-mom who likes to have fun and would love to find a man who would also be a father to her child. Unfortunately, the two men in the story come across as caricatures--too big, too absurd, and too melodramatic to be believed. Could anyone really be as selfish, crass, and uncaring as Jack? Could anyone be as self-absorbed and dysthymic as Miles? Maya is a forgettable character, perhaps unlikable to the viewer simply because she's attracted to a man with as little dignity as Miles. The tragic victim of the movie is Stephanie. No one deserves to be treated as she was, especially by an engaged man only a week before his wedding. Stephanie is the most vulnerable, and she's also the one who is hurt the most. The interactions between Jack and Stephanie make the movie almost painful to watch. Finally, there is the Pinot Noir, the wine that somehow emerges as the main character of this movie. As the perfect glass is sought after, the wine begins to take on a life of its own: tender and fragile, yet with depth of character unequaled by any of the other stars in the movie. It is analgous to the bowl of udon in Tampopo. At the end of the movie, my only conclusion was that despite all the pain and suffering that life has to offer, somewhere there is a wonderful glass of Pinot Noir in which to find solace.